Philo B. Leonard, born in 1890 on Harbor Island to boat builder George Herman Leonard and Adeline (Addie) Church, lived in the DeTour and Drummond area nearly all of his life.  He married Ellen LaSage from Sugar Island.  His grandfather was J.Wells Church, boat builder, physician and journalist of Harbor Island.  Philo, like his grandfather, built boats, which he designed and built from half models, from the tree to the final product.   He designed and built numerous fishing boats and was commissioned to design and build two different wooden car ferries for the DeTour-Drummond channel.  Legend tells us he built 28 boats in DeTour and on Drummond Island, in his lifetime, utilizing local materials.

The Gwen was designed and built by Philo B. Leonard for Albert Schoop and named for his daughter Gwen in 1947. Mr. Schoop used it as a Pilot Tug and Supply Boat on the St Mary's River.  In 1959, with the opening of the St. Lawerence Seaway, the Gwen became the first pilot boat in DeTour Village. She served that purpose for some time.  It is unclear how long the boat was used and then placed in dry dock.​​

This restoration project, and our ongoing maintenance of this beautiful piece of history, would not be possible without the generous volunteer hours and financial support of many.

The Gwen is Renamed

Thanks for Your Patience as We Put This Page Together​

​In September 2018 DeTour Village began an extensive restoration project. Under the leadership and support of Passage Boat Works,  DeTour community volunteers began repairing, scraping and painting the Philo, returning it's luster.  Family members of Philo Leonard remain passionate about this beautiful vessel, and are actively involved it her restoration.  ​​

The boat was purchased and restored by Robert and Diane Cronan of St. Ignace and Illinois (Diane being a grand daughter of Philo Leonard).  With help from Bill McCaffrey, a Waukegan Boat Builder, restoration was completed in 1987. The tug was renamed the Philo B. Leonard, to honor her grand father.

The Philo was entered in the 1988 Les Cheneaux Antique Boat Show and won first runner up best of show.

The Philo was purchased by Robert Bloch of DeTour Village and Ohio in the 1990's, and later donated to DeTour Lighthouse Preservation Society.

Upon closing of the Pilot House in 2010 the boat was again donated, this time to DeTour Village.  It seems all former boat owners were/are equally interested in preserving the history and significance of the builder, the early owner, and the service provided the DeTour community.  The Philo now proudly rests in Shula Giddens Park, along the shore of the St. Mary's River where her working days were spent.

The DeTour Passage Historical Museum has a display dedicated to Philo B Leonard, including his tool box and many of his tools. 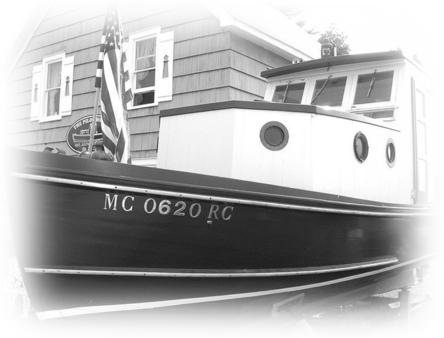 ​​Village of DeTour  and  DeTour Township​
View on Mobile