DeTour Village was incorporated in 1899.  The earliest residents of DeTour were the Mascoutin, Ottawa, and Chippewa Native Americans who established encampments on Pointe DeTour well before early European travelers passed this way.  Some of the early European explorers included Father Marquette, Louis Joliet, Antoine De La Cadillac and Sieur De La Salle.  France claimed this North Country from 1599 to 1761, after this date allegiance was to Great Britain.

DeTour Township was organized on March 28, 1850 under the name Warner Township, in honor of Ebenezer Warner, its first supervisor.  An 1848 map showed DeTour as Warnerville.  DeTour was a mill town in the later 1800's and early 1900's.

March of 1899, a petition signed by DeTour Supervisor Butterfield and forty six other voters of the DeTour area was presented to the County Board of Supervisors requesting that the area, as spelled out in the petition, be designated "The Incorporated Village of DeTour.  The application, having been found to conform to the requirements of the law, was approved unanimously by the County Board at the Courthouse in Sault Ste. Marie on March 16, 1899.  The true photographic copy of the proceedings was ​filed with The State of Michigan, under the date of January 28, 1901.

DeTour Passage Historical Museum chronicles the growth & struggles our village has encountered for many years, provides an abundance of information about our lighthouse, &  is a hub of community information.  Conveniently located in town near Drummond Ferry Dock on the St Mary's River.  This little corner or our community is excellent viewing of freighters, the ferry, and private vessels alike.

During the early days, commerce was by water and all traffic came past DeTour going to and from Mackinac Island and Detroit to the Sault Sainte Marie, Lake Superior and Canada.

Since ships and canoes made a turn to go west to Mackinac or southeast to Detroit, the name DeTour was given which means, in French, "the turn".

The Chippewa Indian name for this area was 'Giwideonaning' meaning, "Point which we go around in a canoe". 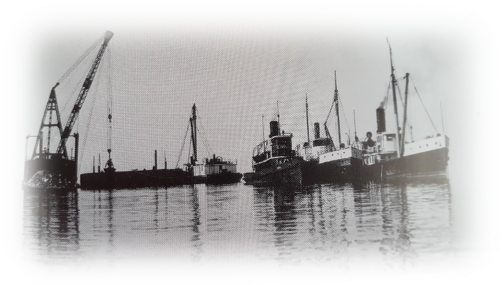