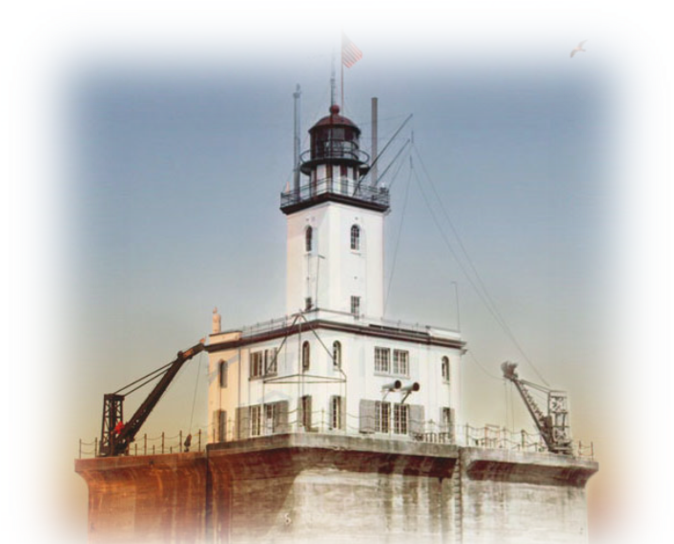 Since 1847, a lighthouse has been located at DeTour Passage at the northwestern head of Lake Huron at the mouth of St. Mary’s River, which connects Lake Huron to Lake Superior.

The first lighthouse, built onshore, the DeTour Point Light Station, was established on April 13, 1847, with the land being acquired by presidential set aside. The buildings were constructed in the same year. However, the light was not shown until 1848. Apparently by the time the construction was completed it was too late in the year to fit the Light and employ the keeper. The original structure was described as a white stone tower approximately 65 feet high with a five room, one and a half story house. There are no known photographs or drawings of the original structures. The iron tower (pictured here) that most people are familiar with at the site was constructed in 1861.

Due to ever increasing ship traffic and the dangerous offshore reef, a new lighthouse was built offshore called the DeTour Reef Light.

The DeTour Reef Light Preservation Society’s Keepers Program is a wonderful, unique opportunity to experience life as a lighthouse keeper on a 1931 offshore historic lighthouse, enjoy the magnificent views of beautiful scenery and freighters coming to and from Lake Huron at the mouth of the St. Mary’s River, and to contribute to preservation of one of Michigan’s magnificent maritime monuments. Approximately 20 ships plus many more pleasure craft pass close by the lighthouse every day. Sunrises and sunsets are spectacular! DeTour Reef Light is the first offshore light (i.e. not land or island-based) to offer a volunteer lighthouse keeper program. Today, only a few offshore lighthouses in the world provide this opportunity.

The DeTour Reef Light, located a mile offshore from the original onshore lighthouse, was built in 1931. It is well known to ship captains and pleasure boaters who sail the upper Great Lakes. The lighthouse stands as a testament to the importance of shipping in the region’s political, economic and social history.

The lighthouse foundation, resting in 23 feet of water, is a crib style concrete 20-feet high 60-feet square base that supports the reinforced concrete/steel Classical Revival-style square building. The white structure with a red roof has a tower extending 63 feet over the deck making the top of the tower 83 feet above the water.

Beginning in the 1870s, crib foundation construction was used extensively for lighthouses on the Great Lakes. The DeTour Reef Light is one of these examples. Wooden cribs were constructed ashore, and then towed to the site and filled with stone.

Once the crib had settled to the bottom, it was capped with concrete or some other masonry. Often, once the crib had settled, it was necessary to level the structure by adding weight to one side or another. When construction on the building was completed, the focal plane of the lens stood 74 above the water. The light was first lit on November 10, 1931.

For generations the Light at DeTour Passage has provided a beacon for those vessels seeking the “Gateway to Superior.”

In January 1998, the DeTour Reef Light Preservation Society (DRLPS) was born by a handful of dedicated and passionate local citizens to restore and preserve this historic maritime monument for people to enjoy in perpetuity.